The other day while practicing fight scenes for the Lao Warrior movie, I was reminded of my first day training Muay Thai in 2002. I kept getting kicked in my knees and quads because I wasn’t used to checking leg kicks.

Then, just as I started to get into the habit of raising my leg to check, we started working on clinching and throwing knees. If you are not used to someone grabbing your neck, pulling you down and slinging you around while they land knees, it can be frustrating.

While I am glad that I studied TKD in the 80’s, the martial arts of today are on a different level. When you train with someone who does Jiu Jitsu every morning and Muay Thai every evening, plus has judo and wrestling skills (i.e. an MMA fighter), you are humbly reminded that you spend most of your time every week filling prescriptions.

My base will always be TKD, so I can still throw kicks with the best of them, but I certainly have found the motivation to get back to work on my Muay Thai and staying well-rounded. I look forward to showing what I learned in the upcoming movie Lao Warrior (2014) as well as in the second edition of Focusing Martial Arts Power. Thanks and see you in the gym.

We recently filmed two great scenes for Lao Warrior; Phantasm and Candlelight. The Phantasm scene was very exciting and involved Jennifer Williamson, Miles Snow and a SWAT team. Kenji Saykosy choreographed some incredible martial arts scenes for this shoot and Directed a long but rewarding day of filming. Kenji was also a part of most of the scenes. Earlier scenes that day involved Jennifer and Nina Bartula. Jennifer’s parts in the movie have now all been filmed, and we will miss seeing her on set. Hopefully, we will see her at the premier.

The Candlelight scene was a re-shoot from earlier this year. We did it this time as an outdoor night shoot and the lighting for the scene, set up by Sean Pollock (cinematographer), was perfection. This scene is a very special scene for the cast, and for Kenji especially. In this scene we see Kenji’s Master (also Tyler’s Master) pass the sword as Kenji takes over teaching at the school. This scene shows the mixed emotions of the main character as he is happy for the promotion but also not sure how Tyler will react.

We are set for more filming this month and July is going to be very busy as well. Thanks to all of our contributors and sponsors for your support and to all of the incredible actors and martial artists for continuing to make Lao Warrior a great project.

April has been a busy month. On the 7th, we went to Triangle Jiu Jitsu in Durham, NC to film some fight scenes for the movie. We had several talented actors from Charlotte (Mike Gutowski, Brittany Bass and Jennifer Williamson) and local incredible actor Tony Basile present for a great day of filming. Kenji Saykosy was directing as myself and several stuntmen spent hours in the cage knocking out some great scenes. Sean Pollock and Daniel Calvert were the cameramen and Jonathan Carvajal was running sound.

On the 14th we had a huge night of filming at the local bar Mosaic here in Raleigh, NC. Except for one person, we had the entire main cast and crew together. This was the first time we had this many main characters together since the photo shoot for the movie posters last year. Once again, the energy was incredible and we filmed until about 2 am. Many thanks go to the extras and supporting actors who stepped up to make it a great night.

For the weekend of the 20th, Kenji headed out to Wisconsin for the Lao International Film Festival. Kenji did a martial arts demonstration and showed the music video from the movie (also released this month), our initial trailer and a promo reel. The reception was great and many new friends were made for the star of Lao Warrior.

We look forward to what May brings as we plan to film several more great scenes for the movie in addition to training a lot to make the fight scenes great. Thanks. 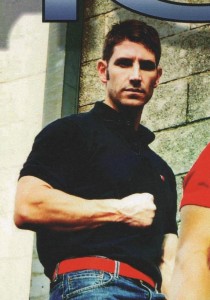 As you might have guessed, David Nelson is a popular name. First let me say I am not the 155 pound MMA fighter (no disrespect intended to him or anyone else who has the guts to step into a cage to fight). I am older than him and my weight class is 185 pounds (look out Anderson Silva). I have not had any MMA fights either amateur or pro, but I have been training in MMA since 2005 and in martial arts since 1984. Even though I am not Randy Couture, I am considering my first amateur MMA fight later this year.

I started with Tae Kwon Do (TKD) and got my first black belt in 1987. I joined the Army in 1988 and was honorably discharged in 1991. I came home and joined the NC National Guard and went back to work as a stocker for Food Lion. In 1992 I started college and began the road toward getting into and completing Pharmacy school, which I did in 1996. I also finished my time in the Guard and received my second honorable discharge in 1996. This gave me time to get back into TKD.

I studied at a great school in Danville, VA (respect to “Brain”) before moving to Greensboro, NC (for a girl-I know, big mistake). I continued to train at another great school where I competed in many TKD tournaments and got my second black belt in 1999 (had to get up and check my certificate to be sure about the year). From there I moved (not for a girl this time) to where I live now, Raleigh, NC.

In Raleigh, I trained at 2 more TKD schools and competed in more tournaments before deciding to diversify. I started with Wing Chun, then Muay Thai Kickboxing, then I found the Royal Tiger Academy where I have been training under Master Saykosy ever since. I am currently working with Master Saykosy on an action movie Lao Warrior, and we plan to release later this year. More on that in future blogs. Thanks.

Martial Arts for Everyone